7/30/2022
We recently reconnected with Scott Romer ‘74 at this year’s alumni picnic! With him, he brought his newest autobiography “When It Was: My life on both sides of the camera” which you can buy now on Amazon. 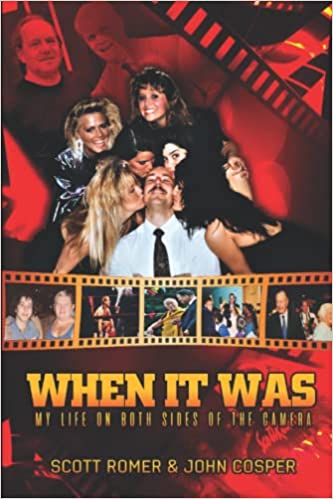 We wanted to know more about Scott’s time at Orchard and what led him to pursue photography and this is what he had to say:
What was your favorite Orchard memory?
I have a few favorite memories. I remember tapping the maple trees with the shop teacher Fred Lorenz to get syrup. I also got to put on a wrestling show for the school with my friend David McLane, who went on to create the women’s wrestling promotions GLOW and WOW. We even got TV announcer Sam Menacker to announce the show for us.
What person, class, or experience from Orchard are you most fond of?
I got to play sports under the legendary Steve Thompson. He was a great coach and mentor for us.
Jim Gould was another favorite teacher. He was fresh out of college, and my buddies and I were so unruly, they assigned Jim to watch over us. He really got us, and when he taught us grammar, he used wrestling as a subject to keep us interested.
What keeps you engaged most with Orchard?
I like hearing from the people I knew at Orchard, and I still keep in touch with a number of friends and teachers. David McLane and I are still buds, and Jim Gould gave an interview for my autobiography.
What do you look forward to during Orchard's Centennial year this year?
I’m excited to reconnect with more people who went to Orchard and share memories. Orchard was a special place that really let me and my friends be who we were. There aren’t many schools of Orchard’s caliber that will let a couple of borderline delinquents take over a school assembly to put on a wrestling show.
What made you want to become a photographer?
I didn’t want to get a real job! Seriously, though, I love taking photographs, I love getting paid to take photos, and I love being in the middle of the action, whether it’s boxing, wrestling, or a black tie event full of celebrities and politicians. I’ve photographed legendary sports figures, award-winning actors and musicians, political figures, and world leaders. People like Muhammed Ali, George Foreman, Tommy Lasorda, Mike Kryzewski, Stone Cold Steve Austin, The Undertaker, Dick the Bruiser, Mel Brooks, Anne Hathaway, Siegfried and Roy, the Dalai Lama, Yassir Arafat, Ehud Olmert, Colin Powell, and Presidents Gerald Ford, George Bush, Sr.,
and George W. Bush.
What inspired your most recent book?
I had so many stories from the places I’ve been and the people I’ve met, I wanted to put it all in writing. I wanted to make sure there was a record, in words and pictures, of the life I’ve led. The book gave me a chance to not only share my crazy life story but pay tribute to the important people who supported me along the way. Every word in that book is from the heart!
Interesting final words from Scott!
“Last May, National Italian American Sports Hall of Fame president, Ron Onesti presented to me the coveted Annual NIASHF Friendship Award at a sold-out boxing event at the Des Plaines Theater that he owns. Less than a week later, Ron had a meeting with Pope Francis in Rome Italy” 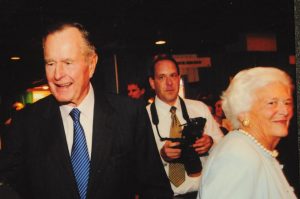 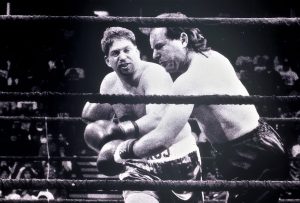 Romer boxed too! Monte Cox takes down Romer. Romer was thrilled when boxing promoter, Fred Berns, used this photo in one of his newsletters.