1/28/2021
If you were one of the 56 million people who tuned in to Apple’s virtual product launch in October, you might’ve noticed Dave Wilkes Jr. from The Orchard School Class of 2003 presenting with Apple CEO Tim Cook.

As manager of acoustics and home audio at Apple, Wilkes and his team helped build an Alexa rival, HomePod mini. As he said at the event, it’s the “ultimate smart speaker for iPhone owners.” And if anyone knows anything about audio, it’s Wilkes. 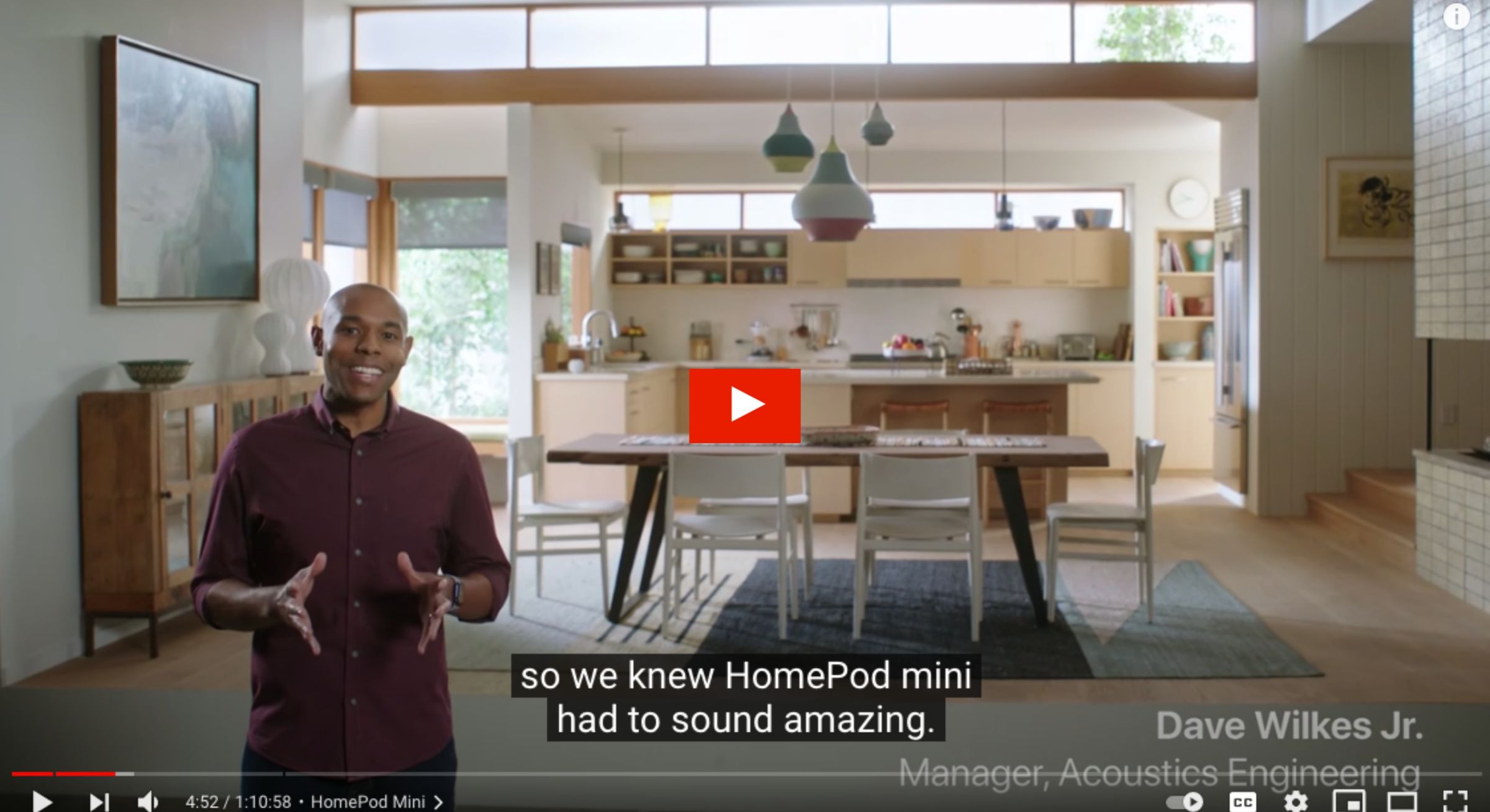 Watch Dave speak at the October Apple event,
the most popular video on Apple's YouTube channel.
As a teen, Wilkes was all in on audio and electronics. He spent most of his free time building speakers and circuits, which led him to Purdue University, where he interned with Bose Corporation and earned two electrical engineering degrees: a bachelor’s of science in 2011 and a master’s of science in 2013. Indianapolis-based Klipsch Audio Technologies then hired him to lead the acoustic design for a line of speakers. Finally, all of this hard work caught Apple’s eye.
Wilkes nearly missed out on this once-in-a-lifetime opportunity to work for one of the world’s top 10-largest public companies. “I ignored them multiple times not believing their interest was real,” he said. But after some networking, he found out the tech corporation was recruiting for a new project—the second-generation Apple Watch.
At Klipsch, Wilkes worked on speakers that were roughly five feet tall, so a move to the Apple Watch and its half-inch speaker was quite a gamble. Ultimately he made the move from Indianapolis to California to work on the tiny speaker with big opportunities.
“Now that I’ve been at Apple for over five years, led acoustic architecture on the watch for multiple generations, and now manage the team creating home audio products like HomePod and HomePod mini,” Wilkes said, “it was the right choice for sure.”
Find out how Dave Wilkes Jr. ’03 went from The Orchard School to a fruitful career at Apple in this Q&A:
How’s life?
Life is great, all 2020-related things considered. After Orchard I went to Brebeuf Jesuit Preparatory School, from there to Purdue for undergrad and grad school both in electrical engineering, and now I have a wonderful family. I met my amazing wife and best friend Rachel at Purdue, and we have two hilarious boys: JJ, who is 2½ years old, and Elliott, who just turned 7 months old. JJ’s cheeky mischievous face is how he always is, so he may be following in my footsteps a bit too closely! I think we all want to know, what’s it like working at Apple headquarters, especially inside “the spaceship”?
Apple Park is as extraordinary as it looks. The attention to detail in the building more than matches what goes into the devices we make. For example, the metal finishes inside are color-matched to the products. So if you’re in an elevator, you can see that your MacBook is exactly the same color and finish as the floor control panel. Even better, the glass used throughout is of such a high quality that when the building first opened, people would constantly run into glass partitions because they couldn’t see them! They’ve since added small markers to keep everyone safe, but you can tell that even those markers were made to match Apple’s design language.
What exactly does your job entail as manager of acoustics, home audio products?
My former role at Apple was leading acoustic architecture for Apple Watch. What that means in a nutshell is figuring out what speaker and microphone are needed to allow customers to have phone calls, and hear from and speak to Siri. all while being able to survive basically any environment the user comes across. Those environments are pretty intense: 50 meters (164 feet) of water immersion, daily Olympic-caliber swimming, 10 meter high dive, etc. That knowledge, however, is directly applicable to other fields in audio, so when I moved to lead the home audio team, I could also leverage the work I did at Klipsch.
In my current role, my team is responsible for the end-to-end audio design of anything that an Apple customer will put in their home. That includes things like HomePod and the new HomePod mini, but also unexpected products like the AppleTV remote, which has microphones in it. We work with dozens of other teams to figure out how to take an audio experience and package it into a product that will fit the constraints of not just cost but also keeping within Apple’s design guidelines.
What’s it like knowing something you worked on will be in millions of homes all over the globe?
It’s very humbling! We spend so much time and effort to get the products just right with the hopes that we can make people’s lives just a little bit better. It’s therefore always exciting to launch something that gets well-reviewed. That makes it worth the crazy hours and sometimes working through weekends or, pre-COVID, traveling internationally during holidays. If someone’s able to enjoy their day a bit more because they get to listen to the music they love or they can seamlessly have a phone call on their Apple Watch in an emergency because of the work we’ve done, that’s the job done well in my view.
How does your Orchard experience tie-in to all of your success?
Orchard is a unique school because it gives its students the freedom to explore who they are and what they want to become. That said, at the end of the day, the school demands the students meet an academic bar that is quite high. I didn’t really appreciate that balancing act until way later, but in a way it’s all a parallel to engineering. You have to come up with any number of creative solutions to problems but using rigid science and math principles. Doing that forces you to learn discipline and that absolutely applies to other areas of your life. I have to say that the teacher I recall who really understood this and truly pushed me to understand it was math teacher Linda Gelhausen. Mrs. Gelhausen set the expectations high in her classes, and I recall with the benefit of hindsight that she was expecting a lot out of me and for sure way more than I was otherwise intending to give. But she didn’t give up! She continued to push me through fourth grade and then even more in fifth grade. I can’t thank her enough for refusing to accept mediocrity when she knew more was available if I would just push myself.
Maybe one day when you’re back in Indianapolis, you could do a mock product release and Q&A for our middle school students.
[Laughs] I’d love to! Just let me know when, after we’ve put this pandemic behind us.
Finally, we always like to ask, what’s your favorite memory of The Orchard School?
We did a lot of unbelievable stuff at Orchard: Chicago, DC, Space Camp, Moontown, The Dig, ropes courses, etc. But I think my favorite overall is extremely mundane: tapping the maple trees and making syrup. I can sense the “seriously? Out of everything?” thoughts from here, but yes, actually. I always loved walking into the forest to check and collect the buckets and then watch Diana Shellhaas stir tirelessly. Thinking back it was the intrigue of “how can this watery stuff from a tree become so delicious?” I also loved the smells: the damp forest plus the smoke from the fire as Mrs. Shellhaas was reducing the sap. So yes, maybe a simple answer, but a true one.

Click here to read the previous alumni spotlight on Courtney Jones '13.
Back