11/23/2020
Courtney Jones ’13 recently completed a hard-fought soccer season on full scholarship at Clemson University, where she racked up nearly 700 minutes for the women’s Division I soccer team. Though the fourth-seeded Tigers lost in the Atlantic Coast Conference (ACC) quarterfinals to Duke University, the season was still memorable. Jones started with an assist and a goal, and she ended the season with perhaps her greatest soccer accolade to date—an All-ACC selection.
These on-field achievements join her stellar successes in the classroom. After graduating a year early with a bachelor’s degree in psychology, Jones entered Clemson’s graduate school to study clinical health counseling.
Jones believes her formative years at The Orchard School helped foster her love of learning. “Orchard provided me a challenging environment academically,” she said, “which made me set such a high value on academic success, given that I sought out more environments like that at North Central High School and Clemson University.”
Orchard’s athletic director, cross country/track and  field coach and 6th grade social studies teacher Justin Burris said it was an honor to be Jones’ teacher and coach. “Courtney was an ‘A’ student with a light-hearted, positive outlook,” Burris said. “She set five school records during her middle school years at Orchard, and she made the All-State Team in track and field all four years at North Central High School.”
According to Burris, “Courtney only has two speeds: on and off.” Her top speeds were enough to generate track and field interest from top universities. This was no surprise to Burris, who has supported Jones’ career  long after her time at Orchard. “It’s a privilege to continue to cheer her on,” he said.
Catch up with Courtney Jones ’13 below. We discuss college life, sports, social justice and more in this Q&A:
How is life treating you at Clemson University?
Life right now at Clemson is very weird! I am very grateful that we are able to have a soccer season and maintain some normalcy, but not going to class in-person is hard for me. Starting graduate school and not meeting up with new classmates just feels off, like I’m missing out on those new connections. We have to keep in our soccer team bubble, and not being able to hang out with my friends on other sports teams also stinks. But at the end of the day, it is worth the sacrifice.
Other than that, I am doing great! My parents always find a way to see me and I call them all the time, so I never have to worry about feeling homesick.
What are you studying?
I graduated a whole year early in spring 2020 with my bachelor’s in psychology and a minor in athletic leadership. I chose psychology because I love learning and understanding how and why people think and cope with certain events and go about their lives. Everyone is different and I think trying to understand these differences and how they came to be is so interesting. I am currently in Clemson’s graduate school program for clinical mental health counseling in order to become a clinical counselor-therapist. There is something so special and important about helping others become their best selves and aiding them during their moments of darkness. I want to be there for those people.
Speaking of soccer, congrats on getting a goal against top-ranked Virginia at the beginning of the season!
Thank you so much! That goal was so important for me and my teammates. All last year, I went through a drought of not scoring, and I was overthinking everything. So a goal against a typically top-5 ranked Virginia was the icing on the cake for me. That goal also gave my team more room in case we made a mistake. I think I rewatched it like 20 times; I was so happy.
Justin Burris says you were quite the athlete at Orchard!
Mr. Burris was an awesome track coach! He and Orchard’s physical education teacher and coach André Kirtz really pushed me to be my best as a track athlete, since I didn’t play soccer at Orchard. I always remember Mr. Burris’ love for Steve Prefontaine and his motto quote, saying, “To give anything less than your best is to sacrifice the gift.” As a middle-schooler, sometimes it’s hard to understand the true value of statements like that, but it holds so much truth to it. The biggest battle we fight in life is against ourselves, and not giving our all is a waste of our potential.
Mr. Kirtz helped me, on the days I wasn’t busy with soccer, to really work on my form as a track athlete (apparently I ran like a soccer player). Being a rather nervous kid, he also helped me to relax and trust in myself. Sometimes in high school track meets, I would hear his voice yelling “be smooth” in the back of my head during the 400-meter dash [laughs]. I have to admit, he really helped foster my love for track and my courage to pursue it in high school. 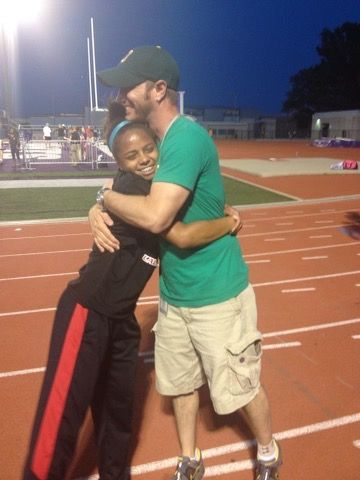 Mr. Burris and Jones embrace after a successful race at North Central High School
Both of these coaches really allowed me to have a passion outside of soccer that I probably would not have kept if it had not been for them. Coaches at a youth level matter, and I’m grateful I had such great supporters and teachers that pushed me and allowed me to grow as an athlete.
Track and field has always been a hobby for me. Soccer always came first. To my surprise, I actually got a lot of interest from universities for track and field like Yale, UCLA, Clemson, and South Carolina. I don’t know if I ever shared that with those two coaches, but I would have never gotten those opportunities without them.
We were recently scrolling through Instagram and noticed the Unity shirts created by student-athletes at Clemson University. And then we noticed your picture! Can you explain the purpose of the shirts and what it means to you?

I work with a group called Tigers Unite that caters to the needs of minority student athletes on campus. We created the Unity shirts in response to the recent events (regarding police brutality and Black Lives Matter) as a visual representation of all of our hard work. Over the summer, during the pandemic, we had a virtual town hall meeting that allowed student athletes to express their emotions (fears, sadness, disappointment, frustrations and pain) and for others to hear it out. It was an amazing experience for every student athlete attending to voice their pent-up emotions but also for others to learn and listen to their peers.

From here, we conducted other town halls regarding voting registration, leadership, and the education of the long and complicated history of Clemson University. Along with this, we were able to meet with our athletic director to express our needs and wants of mandatory diversity and inclusion training for all staff and student athletes, change the names of certain buildings and streets and many more. We led a peaceful protest in Clemson that accrued thousands of people for the cause. Seeing and participating in all of the above, student athlete-led, is what Unity means to me. Unity is seeing my community come together for the better to create a safer and more educated environment, giving voices to those who have been oppressed and ensuring we get the equity that we deserve.
Check out our hard work at clemsontigers.com/unity.
How did your years at Orchard help you embrace diversity?
I think Orchard taught me from a young age to respect everyone and our differences. We are all unique human beings with different backgrounds, and there is so much beauty in that. Honestly, I think because Orchard taught me to value diversity, that was something I sought out in a high school. Thus, I chose North Central High School, for its diversity and academics.
Do you still keep in touch with anyone from the class of 2013?
I do! The person I keep most in contact with is Zachary Thompson ’13. It’s kind of cool to say we’ve been friends for almost 19 years because we were in preschool together. I have also kept in touch with Will Hirschman ’13 and sometimes Audrey Heile ’13.
Back